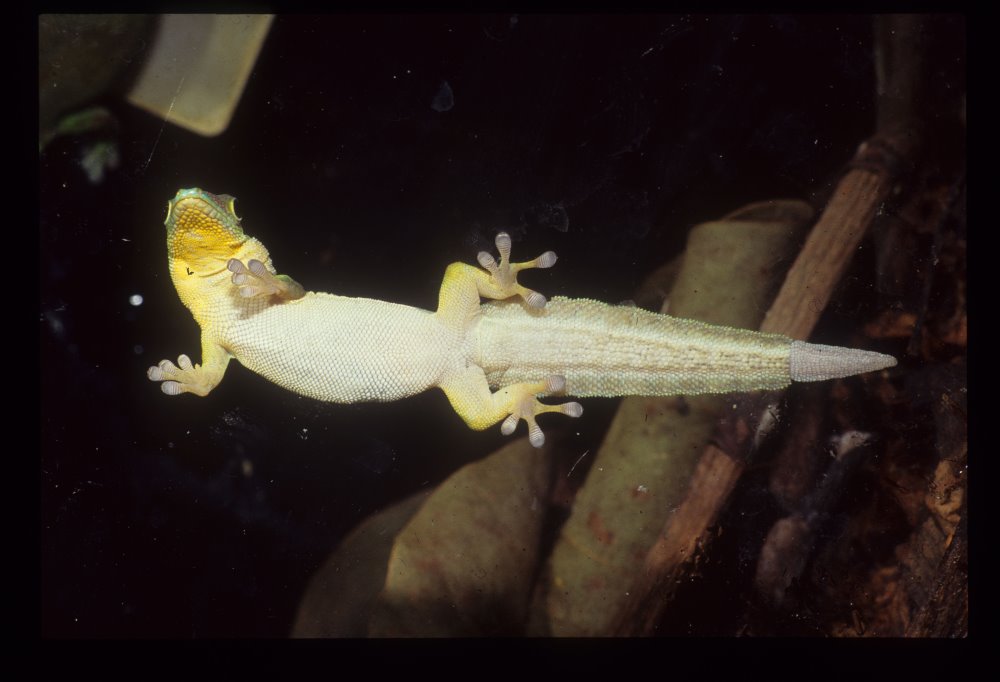 The common name says it all. Unlike several of the medium-sized lookalike day geckos, there can be no question about the identification of this beauty. The flattened tail, present on adults of both sexes, is immediately discernible and diagnostic. Original tails are fringed, regenerated tails are flattened but not fringed. Hatchlings and juveniles have a rounder tail. Three red bars cross the head and 3 elongate red markings are present on the lower back. Always a hobbyist favorite, this species was never imported in large numbers. Like other members of this large genus, this species is diurnal and feeds on nectar and pollen as well as occasional small insects. It is said by some to be a rainforest dweller, but others say it is most common more in the open on coconut palms and occasionally on bananas.

In its restricted range in eastern Madagascar, the Flat-tailed Day Gecko is said to dwell in family units of a single male and a harem of several females. Apparently subadults of both sexes are tolerated by the dominant male until their maturity. Glaw and Vences have stated that even the hatchlings of this taxon are agonistic.

Males of this species attain a length of about 6 inches, females top out at about 5 inches. Several clutches are produced annually by adult females. Eggs may be produced singly or in pairs.
Continue Reading "The Flat-tailed Day Gecko"